In celebration of Merce Cunningham's 100th birthday, White Bird will show a rare performance of his works under the direction of one of his own students.

When it comes to modern dance, no choreographer has had such a palpable effect quite like the Pacific Northwest's own Merce Cunningham.

Born in 1919 and raised in Centralia, WA, Cunningham developed his dance skills at Seattle's Cornish College. From there, he moved to New York to study under modern dance pioneer Martha Graham and eventually starting his own dance company in 1953.

Cunningham is remembered as one of the most defining and explorative choreographers in the world who, in the middle of the 20th century, helped create techniques that would change modern dance forever.

Merce Cunningham passed in 2009, but his legacy lives on in the dance community—and this year's celebration is particularly special: this April marks what would have been Cunningham's 100th birthday. Across the world, events and performances will commemorate Cunningham's contributions and innovation, from New York to France, and now, to Portland.

Later this month, a former Cunningham dancer and the executor of his legacy is bringing two of his groundbreaking works home to the Pacific Northwest. Robert Swinston is the artistic director bringing to life "Merce Cunningham at 100: The centennial celebration of legendary choreographer and dancer Merce Cunningham," which will be performed Nov. 21-23 at 7:30 p.m. at Newmark Theatre, 1111 SW Broadway in Portland. The event will also feature live music by Gavin Bryars.

Opportunities to see Cunningham's work performed live are vanishingly rare. After he died, his dance company did one final tour around the world before disbanding in 2011.

Rarer still is the chance to see Cunningham's work performed in his home territory under the direction of one of his own students. The last time this happened was fifteen years ago in 2004, when White Bird brought the 50th Season Anniversary Celebration of Merce Cunningham Dance Company.

The Northwest landscape served as a crucial backdrop and influence for Cunningham's work, says Swinston. "The Pacific Northwest was very important to Merce coming in. It guided him to make dances about nature." Swinston was named a trustee of the Merce Cunningham Trust in 2009 and joined the Trust's staff as director of choreography in 2012 after 31 years with the Merce Cunningham Dance Company.

Cunningham is credited with expanding the horizons of dance — his seven-decade career is distinguished by constant innovation, expanding the frontiers of contemporary art, visual arts, performing arts and music — and, radically, with separating dance performances from music. In his frequent collaborations with the avant garde composer John Cage — who was also his lifelong romantic partner — Cunningham played with the idea of dance movements standing alone, without ties to rhythm or musicality.

The November White Bird performance will feature two of Cunningham's works. First, "Biped", which intersects enthralling choreography and motion-capture technology. Then "Beach Birds", in which dancers move with the fluidity of flocks of birds. It is something of a time capsule of two works that helped shape modern dance and represent key aspects of the Cunningham Technique.

"Beach Birds," for example,showcases the intentional, disjointed effect of Cunningham's work, where the torso and legs move in opposition to one another—a deliberate departure from ballet. The work is more evocative of an autumn afternoon at the Sauvie Island Wildlife Area than a production of "Swan Lake": against the naturalistic hum of Cage's soundtrack, the dancers stretch, walk and preen like real birds, turning their faces in bodies in multiple directions. The resulting work is no less graceful for its lack of staginess. Cunningham was also one of the first choreographers to begin working with technology in his performances, including "Biped," which stands as an example of his cross-disciplinary performing arts focus. Created in collaboration with dancers Swinston, Jared Phillips, Jeanne Steele and with digital artists Paul Kaiser and Shelley Eshkar, "Biped," Cunningham wrote, "gives me the feeling of switching channels on TV." The piece uses 70 phrases transposed onto animated digital images, as well as abstract patterns like vertical and horizontal lines, dots and clusters projected onto a scrim at the front of the stage — behind the live dancers. 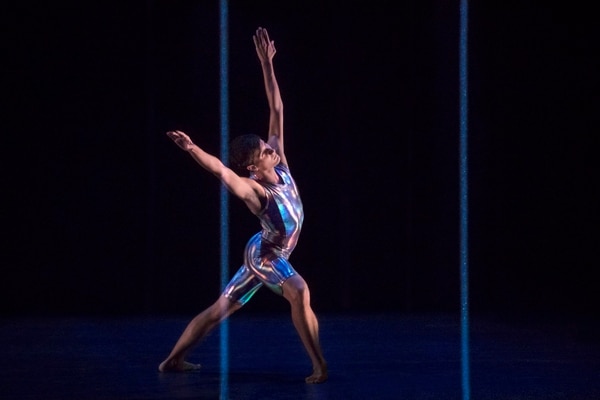 "The whole point of the Cunningham and Cage work is to return to nature —without expressionism, without meaning — for every person in the audience to make their own decision about what they've seen, according to their background," Swinston says. "We're not guiding anybody on the linear trail for beginning middle and end. It's up to the audience to watch it like they would go to museum and walk by a painting, another painting, a statue and not make up their minds. So they have the experience. It's not guided by us. It's up to you to guide yourself through this process."

See Merce Cunningham's work in a once-in-a-lifetime performance. White Bird will present "Merce at 100" on Nov. 21-23 at the Newmark Theatre, with France's National Center for Contemporary Dance/Angers ensemble under Robert Swinston's direction. Learn more about this exclusive performance at whitebird.org/cndc-angers-robert-swinston.

October DanceWatch: The moves get spooky