Dancers took the stage at the Portland premiere of Sasha Waltz’s KÖRPER before the audience had finished taking their seats. While all the lights in the Newmark Theatre were still on, the industrial sounds of Hans-Peter Kuhn’s multi-channel soundtrack blurted from speakers around the theater. Two dancers approached the the massive wall that bisected the stage diagonally (think Richard Serra’s Tilted Arc), and at the same time individual body parts—a foot here, some fingers there—emerged from two small holes in the weatherbeaten, blue-grey surface of the enormous monolith.

This was not going to be an ordinary show.

Designed by Thomas Schenk and Heike Schuppelius, both of whom studied architecture, the wall is unlike any set seen before in a White Bird performance. The first German company ever presented by White Bird, the presence of Waltz and her amazing wall in Portland owes much to the assistance of the organizations collaborating in the Year of German American Friendship 2018/19. With all that in mind—and considering that the dancers alone represent more than a dozen countries—the show crackles with a sense of a great converging of effort and ideas into a singular experience, marked by a monumental wall. 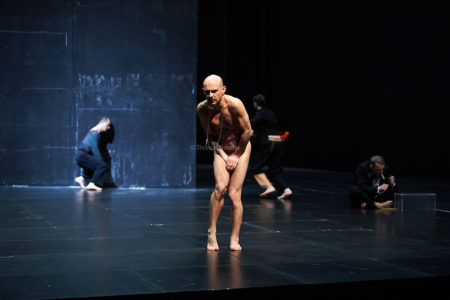 Sasha Waltz and Guests has collaborated with more than 300 artists and ensembles since its founding in 1993. Collaborators include architects, visual artists, fellow choreographers, filmmakers, designers, musicians—and even dancers. These guests represent 30 countries, participating in more than 80 productions with Waltz in what she calls an “international and constantly evolving network.”

Waltz’s international reach is complemented by her major influence at home in Berlin. The program notes that Waltz has been “increasingly committed to educational and social projects” in Berlin, including founding the Children’s Dance Company in 2007 and the interdisciplinary “open-exchange” platform ZUHÖREN, a “third space for art and politics.”

The title KÖRPER is simply the German word for “body,” situating this piece as the foundation of the three-part choreographic cycle about humans and their bodies that Waltz has been working on for the last 20 years. In the pre-show talk with White Bird’s Walter Jaffe, company manager Karsten Liske referred to Waltz’s research into the human body and its foibles for this piece as “emotionless,” remarking that passion and sensuality were reserved for the companion piece S. While that claim does seem to hold true for the way that the human body is almost mechanically appraised throughout the show, don’t think that means the show is dry or staid in any way. It runs a gamut of intensity, from the visceral to the beautiful to the distressingly-medical.

Waltz’s statement puts it this way:

Life’s substance can be pulled this way and that, thrown about, piled up and dissected. Through a sober recognition of the body’s materiality, this piece tries to understand the fundamental split imposed on us by our physical nature.

She later asks  “why do we treat our fragility with such severity?” and “why do our accounts of our…bodies…bypass what we actually feel?” These are deep questions to be asking about being human, and one senses that tugging too hard on them might make your whole sense of self unravel like a ragged sweater. The 90-minute, no-intermission concert covers an enormous amount of ground in the service of tangling and untangling the messy interweaving of body and self.

To picture the performance at all, you have to first appreciate the presence of the wall. Reaching nearly to the rigging at the Newmark, it seems almost too big to fit in the space. In different lighting, it appears as either a battered, deep blue or a deep-slate grey, verging on black. Its presence on stage is often a sort of foil to the bodies that move around it—it is quiet while they are loud, it is steady while they are frantic, it is hard while they are soft. 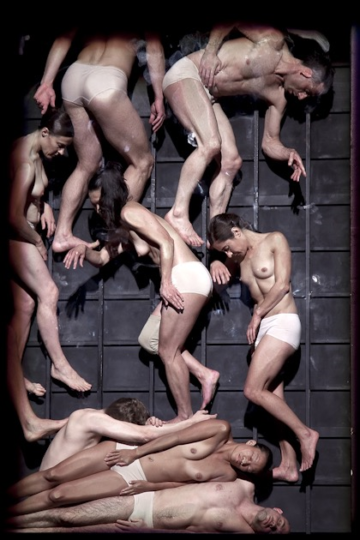 Although it appears to be a simple rectangular plane dominating the stage, it’s capable of surprising transformations. At turns it becomes a chalkboard, an elevator, a ski slope, and more. In this way it is an apt representative of the spirit of the whole piece. Firmly grounded in its materiality, Waltz and company take their explorations of its physical possibilities to surprising limits, breaking new frames of reference with deft timing that keeps the show humming along.

Proceeding in overlapping scenes that sometimes verge on dramatic skits, the choreography transforms the dancers  through costumes, clever props, physical one-liners, and some absolutely virtuoso dancing. It’s worth noting that the dancers in this performance are the same from the original staging of the show in 1999. They bring an effortlessness to some truly strange movements that often cross unexpected physical boundaries in a way that only mature dancers can,  clearly drawing on a deep knowledge of the piece, their own bodies, and each other.

This is a show that courts transgression as inventively as Marie Chouinard, redrawing the dancers’ silhouettes with props, impossible-seeming movement, and a clinical touch to how it encounters the physical stuff of bodies. Waltz is not as hard-edged, though, and betrays a greater affection for bodies and the dancers who use them in the journey she has set out for her company.

While the substance of the show still feels startling and new, aesthetically it sometimes reminds the viewer that it was born in 2000. Its occasionally dark, industrial vibe and anarchic preoccupations feels a bit like a collision between Hieronymus Bosch and The Matrix, but authentically so. Plenty of contemporary shows slap on arbitrarily-intense techno soundtracks and other countercultural signifiers that lost their edge in the early 2000s. Few get as truly weird as Waltz does, and fewer still manage to keep such a durable sense of intention throughout the journey. And why not? We may be used to them, but bodies are weird.  They are also incredibly malleable, resilient, beautiful, and, above all, full of possibility. KÖRPER is almost without comparison in how it explores these possibilities, and we are lucky to have this show, rarely seen in the US, in Portland.